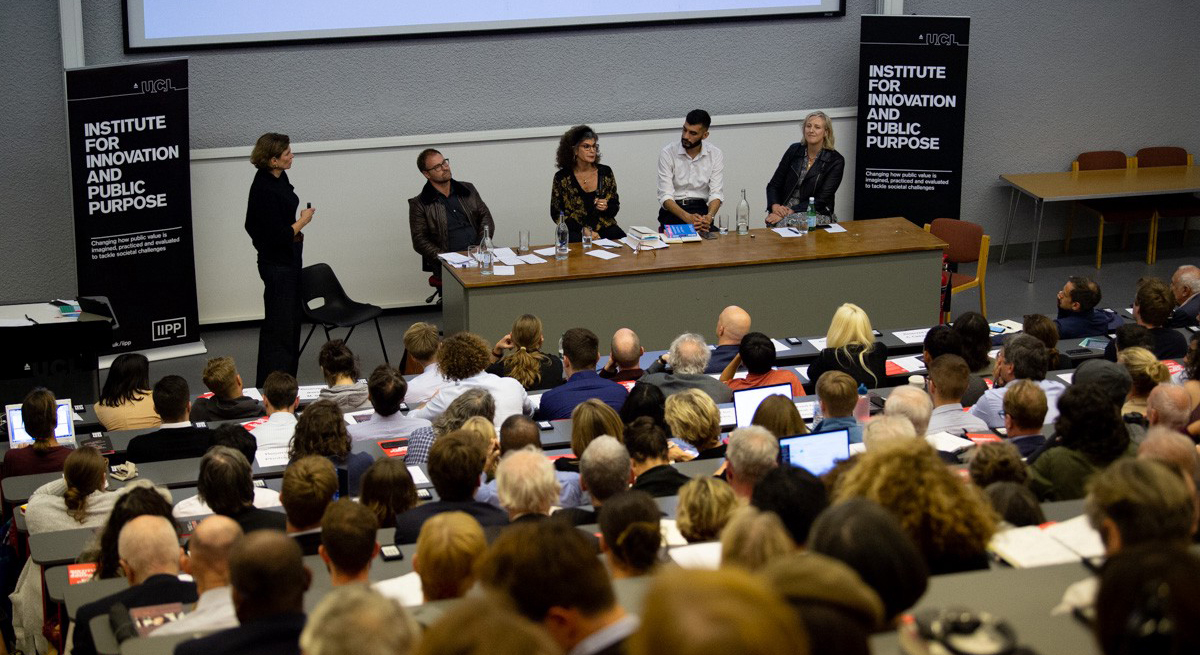 Worker organisation and the challenge of shaping markets in “the Age of Surveillance Capitalism”
by Damon Silvers, UCL Institute for Innovation and Public Purpose | 04.04.2020
TAGS All Partners

As readers of this blog know, I have been writing a series of posts about worker organisations and innovation, a series of posts that had a kind of plan behind them. This week though, we here at the UCL Institute for Innovation and Public Purpose (IIPP) had the opportunity to hear from a visionary public intellectual, Harvard Business School professor Shoshana Zuboff. What Professor Zuboff describes in her best-selling book, The Age of Surveillance Capitalism, is why the urgency for effective worker organisation is so great in the digital economy.

Zuboff’s book and talk for IIPP describes how platform companies have taken our thoughts, our interest in interacting with other people, and our need for a variety of conveniences; and turned them into a system of total, panoptic surveillance and manipulation. Surveillance capitalism gathers data relentlessly. However the goal of this system is not mind control or political domination, but the mindless pursuit of profit.

This conversation has been gaining steam everywhere but it has almost always been a conversation about our lives as consumers. That’s because the chattering classes are still relatively insulated from the implications of surveillance capitalism for our lives at work.

If you want to know what the platform companies’ idea of the future is like, ask someone who works for them. Or better yet, ask someone whose work is controlled by them.

Carole Cadwalladr, an investigative journalist for the Guardian and Observer, was one of the members of a panel who spoke following Professor Zuboff. Cadwalladr had worked as part of a reporting assignment at an Amazon warehouse. Her reporting shows what surveillance capitalism means for the future of work — a world of work where your every act, your every motion, is catalogued and mined and fed back to you as an instruction; and where your wages are constantly adjusted based on your employer’s panoptic understanding of markets — labour markets and product markets, that you can barely see.

For many platform workers, this world is already here. This is the world of the driver — the Uber and Lyft driver, the Amazon delivery driver, and increasingly drivers for older firms like UPS and DHL. This is increasingly the world of the factory worker, the construction worker and the health care worker. The immanence of this world of work in hospitality was the core issue in a wave of strikes at Marriott hotels across the US last year.

When Shoshana Zuboff writes about the combination of big data and artificial intelligence that drives surveillance capitalism, she has an economic critique — a critique about rents and market power and imbalances in information. But she also has a deeper critique, one that goes to the heart of the growing unease throughout our new global society about the age of surveillance capitalism. As she puts it in her introduction, it “strip(s) personal life of whatever makes it personal for you or for me.” What this means at work is that surveillance capitalism both is hyper-exploitative in traditional economic terms, and it inexorably strips away the insulation the protects our self at work — that part of us that is both physically and psychologically distinct from our employer and our employer’s purposes.

But, of course, this type of threat to human dignity is not new in modern society. The textile mill, the auto assembly line, Frederick Taylor’s time and motion studies — all aspired to this same type of totalitarian capitalism. To the extent they were thwarted — to the extent child labour came to an end, to the extent the weekend and the eight-hour day came into existence, to the extent workers began to earn a wage that was a fairer reflection of the wealth they created — it wasn’t because the technology demanded these things. It was because a combination of the democratic state and the labour movement engaged in a process of market shaping that made markets more compatible with our living as actual human beings; with our own unique and irreplaceable inner lives, families and communities.

And so we come back to the urgency of effective democratic worker organisation in the age of surveillance capitalism. Because as a consumer I can always put the smart phone down (or at least I think I can). But at work it’s a different story. Employers are pushed by both their own desires for profit and the incredible coercive power of unregulated competition to deploy the full suite of tools of surveillance capitalism in the workplace. Those tools begin with a kind of hyper-Taylorism, a second by second control of what we do at work. But they don’t end there. The data employers collect on their workers can itself be monetized — as we learned a few years ago when a number of large employers in the U.S. took out life insurance policies on their employees, policies management referred to as “dead peasant insurance,” arbitraging the information they had on their employees’ life expectancy against the insurance companies’ actuarial tables.

Perhaps even of greater consequence is who controls and can monetize the data we create at work — not about us personally, but related to the work itself. Workers in creative industries have always fought with their employers over control of what they create. But increasingly this kind of conflict will be a defining economic tension in the workplace. For example, it really seems like it is Uber and Lyft’s control over the data their drivers create that really cements point that those drivers are subordinate to and not independent of the platforms they work for.

Unless, that is, we collectively insist on changing the rules, reining in not the technology so much as those who control and profit from it. Because of course the first step towards freedom is to recognize that we are not in danger of succumbing to robot overlords, but rather to those who write the algorithms that govern the robots and harvest the profits that flow from the work they and we do.

By the standards of the past, the strikes at Marriott last year by the US union UNITE-HERE were not that big. All in all, less than 50,000 workers struck. But the demands — that Marriott negotiate the deployment of robots and surveillance technology at work, that there be limits to its use, and that the gains from new technologies be shared — these were revolutionary demands. Market-shaping demands.

In societies where workers have more bargaining power, where unions are stronger and labour relations more regulated, this conversation is much more advanced. France is experimenting with ordering employers to turn off their servers during non-working hours to push back on the phenomenon of workers taking the electronic sweatshop home. In Scandinavia in the context of near universal collective bargaining, workers and their unions are deeply engaged with employers in setting boundaries around privacy, data ownership and profit sharing.

But for countries like the US and the UK, where industrial age labour movements have been under continuous attack for decades, the age of surveillance capitalism demands that workers and the governments they elect build new worker organisations capable of fighting back against both rent extraction and soul extraction.

And the stakes here are higher than just the workplace. Because if surveillance capitalism is to be tamed and the markets it creates are shaped in ways that create public value, the State must play a much larger role than it is today. And who will control and direct what the State does? Both history and the course of recent events suggests the only force capable of counteracting the barons of surveillance capitalism is the organised power of their workers. And, in some sense, the point of Shoshana Zuboff’s book is that we are all their workers, whether we know it or not.

Damon Silvers is a Visiting Professor in Labour Markets and Innovation at the UCL Institute for Innovation and Public Purpose (IIPP).